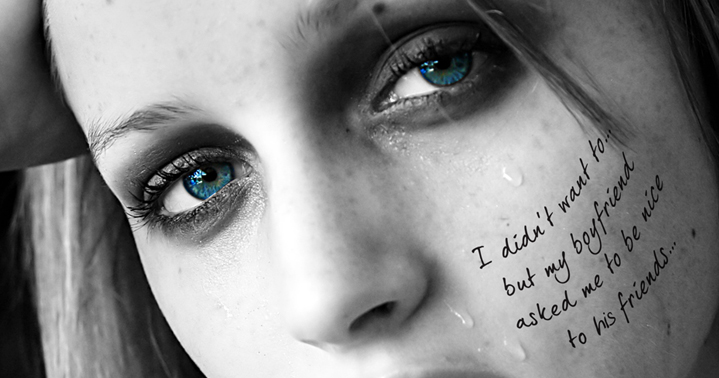 Moving to a new school was a big deal for me, I was at last able to leave behind the torment dished out to me by the kids who made fun of me because of my weight. New school, new start. I tried hard to make friends over the next year but I still felt like an outsider. I ended up skipping school when I could get away with it and that was how I met Dan.

Dan understood me. He knew how unhappy I was. He took me under his wing and told me not to worry about that fact he was a lot older than me – what mattered was how we felt when we were together. He did warn me not to mention it to my mum though, as she wouldn’t understand.

He liked that I was a bit bigger than other girls. He made me laugh and feel good about myself. We used to hang out with his mates and they spoiled me, buying me drinks and cigarettes. In the early days we had such a great time, finally I felt wanted.

I couldn’t speak to my mum about it – she didn’t understand and she was never around anyway. I couldn’t trust anyone at school either. I felt so low that I started to cut myself because the pain I felt when I did it made me feel better. My life line came when one of my friends noticed the cuts on my arm and told a teacher.

Telling someone about Dan and his mates was the best thing I did. Dan was the adult and I was kid. He knew I was vulnerable and he took advantage of me, I can see that now. Dan and his mates have been locked up and will be spending the next 8 years in prison. If my story saves just one person from experiencing what I went through, I know some good will have come from my experience.

Just need someone to talk to?

Child sexual exploitation is A CRIME

You are not alone, there are specially trained professionals that help you. The police and their partner services will support you and your family. Report child sexual abuse to the Police by dialing 101 or anonymously to Crimestoppers on 0800 555 111. If you or someone you know is in immediate danger dial 999.